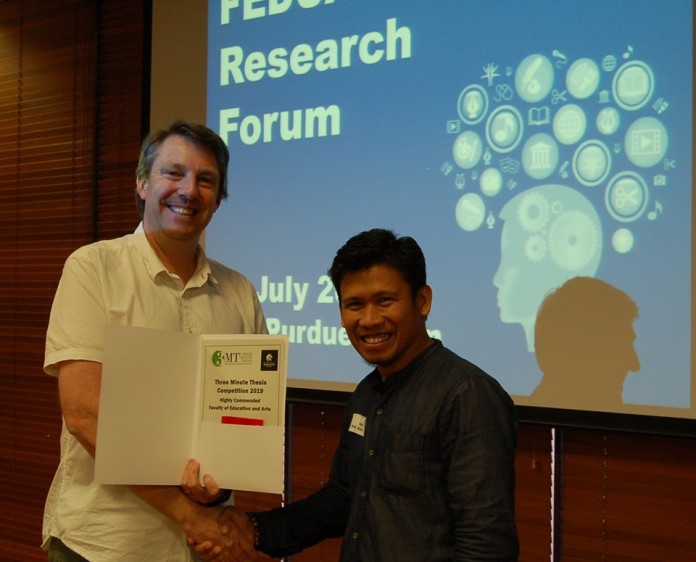 “If someone throws stones to you, do not throw him/her back. Catch and pick up the stones my son. Then, use the stones to build your house”. An advice that always motivates contributor Akbar to catch his dreams. Although his parents were incapable to support him financially to study at higher levels, he got scholarships for his Bachelor, Master, and Doctoral Degrees which can provide him financially to study. In this article, contributor Akbar shares his inspiring stories about his childhood and how he achieves his dreams. Let’s check it out!

I heard about the incidence about Papuanese students were called monkeys in August 2019 I was disparately curious to find the video in you tube about the incidence. As I was watching the video, it drove me back in my childhood, when I was bullied and called Onye-onye. “Onye-onye” (read: little monkey) was how some people called me that time. I can understand why the people called me such a way. It was because I was an aggressive, dark-skinned short little boy. When the people called me that way I could only smile, because I believed that as I grew up older they would get surprised of seeing how this little monkey achieved his dreams. I did feel offended and was eager to fight with those that offended me but I believed that my mother bore me not to fight. I believed that my mother bore me for something more important. As I grew up to teenagers, I helped my father in a farm, working to grow Cocoa. Almost every morning I went to the farm and worked under the sun. It truly helped shape my Onye-onye look.  “How are you Onye-onye?” said a relative who came for a visit. This time I did not feel offended at all because perhaps I was used to being called in such a way or maybe I felt that it was the way I looked that time as a farmer. Altough I was just a farmer I still had a belief that this onye-onye would change one day but I was not sure when and how. God Knows!

As I graduated from Senior High School, I was desperately eager to continue my study to university but my parents were incapable to support me financially. It was because my father just got his veteran pension for a living that time and he suffered from a stroke. Also, he was not in a productive working age when I grew up so that he could not work hard for the family to earn a living. Another problem was that I had a nuclear family. There were fourteen siblings to feed in the family. With this life condition, there was no point of an opportunity for me to continue my study to university. The thing was that I learnt to accept this bitter reality but, still prayed for God’s guidance for achieving what was best for my life. In this point, I surrendered my life to the Creator of life and sought for any possible opportunities to earn money to support my ambition of studying at university. However, I did not find any of that opportunity came for almost 6 years. This was the lowest point of my belief that I could be a university student. I felt that studying at university was not possible and thus, I forgot that ambition. During the years, I left Makassar and went to a village to cultivate a land to farm. Being a farmer was the only path I saw to survive for a living. Although farming was not a prestigious job in the society I lived in, I felt grateful with my life and the job because I could help my parents with this farming and fulfilled our basic needs for food. The visible consequence was that I had a dark skin that made some people still called me Onye-Onye. This time I did not mind and did not angry for that call. Just wait and you’ll see!

It happened that a relative of my father came to my house and invited me to help him sell Chinese herbal medicine in traditional local markets. To do that, I needed to stay in his town located about 180 kilometre from my village. I helped my father’s relative sell herbal medicine for a month but he wanted me to quit as he realised that I had a skill of teaching English. He suggested me to help his son who managed an English course to teach English for teens. At this point of experience, I had a chance to continue my education to an Islamic college and decided taking English teaching for my bachelor degree from the salary I got from that job. I feel that time flies really fast after that moment. I finished my Bachelor Degree in English Teaching for four years and a half in State College for Islamic Studies of Palopo (STAIN Palopo, now it has been institutionally transformed into IAIN Palopo). Then, I got my Master Degree from the University of Adelaide and Now I am studying at the University of Newcastle for my Doctoral Degree. For some people, this may be just usual achievement but for me, these have been rewarding experiences, particularly because I studied for the three educational degrees, supported by Scholarships namely the Scholarship of High-achieving Students for the Bachelor Degree, the Australia Award Scholarship for my Master Degree and the Scholarship of Indonesia Endowment Fund for Education (LPDP) for my Doctoral Degree.

At present, this Onye-onye studies at the University of Newcastle, one of high-rank Universities in Australia. He always tries to do his best to enrich his educational experiences although he has something missing because he cannot effort taking my family with me for the first year of his study. Nevertheless, during his first year study he got several surprising opportunities to enrich his study experiences. The first opportunity was that that his supervisor encouraged him to participate in 3-minute-thesis with other doctoral students. Although he had not got his confirmation. He was surprised for being awarded the first place for School of Education level, and People’s Choice and Highly Recommended for Faculty of Education and Art level. Another opportunity is that he can be part of Islamic student organisation as a Secretary of University of Newcastle. His father who was a veteran once advised him and I want to share this with my readers. “If someone throws stones to you, do not throw him/her back. Catch and pick up the stones my son. Then, Use the stones to build your house”. What he understood from his father’s saying was that every time the people called him Onye-onye, he needed to build up his motivations to explore his potentials to achieve his dreams. He found that even when he was desperate and down on the journey of pursuing those dreams. Supports like LPDP who makes this Onye-onye’s dreams come true are always there. Also, what surprises me more is that this Onye-onye is trusted to be the President of PPIA Newcastle Australia this year.

***
Photos provided by the author 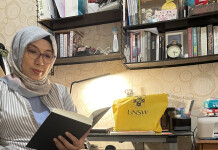