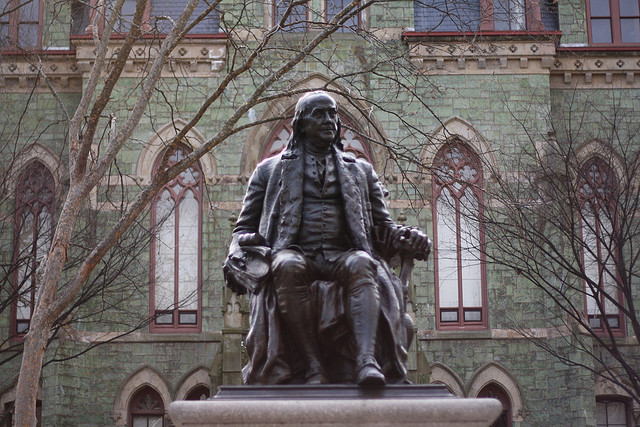 Vice President Boediono, Anthony Salim, James Riady: What do these names have in common?

All of these Indonesians had graduated with a degree from the Wharton School, University of Pennsylvania. The Wharton School is one of the four undergraduate schools at Penn (short for University of Pennsylvania) that specifically teaches business. Wharton, as we students affectionately call it, has consistently been ranked number 1 in undergraduate business education by different publications, including U.S. News and World Reports  and Businessweek. It is the world’s first collegiate business school, and is the only one that offers undergraduate business education within the Ivy League. Alumni of the school includes Warren Buffett, Donald Trump, and Aditya Mittal,

Classes are competitive, since most assignments and exams are graded using a curve system. You have to be the top X% of the class to get an A, the next Y% will get a B, and the rest of the class will get a C or lower. As one of Penn’s deans once memorably said at the beginning of my Penn education, “It is not like high school where all of you guys get As so easily. You will get Bs and Cs. Half of you will be at the bottom half of the class.” However, it is not always cutthroat and intense. A lot of classes actually have projects that promote teamwork. Wharton realizes that one simply can’t thrive in business alone. For example, Management 100, a mandatory class for freshmen, teaches you about leadership and teamwork by working in teams and partnering up with non-profit organizations in Philadelphia to realize a business plan for them. (Fun fact: This was the class that Donald Trump, an alumni from Wharton, based his reality show “The Apprentice” on).

Business ethics is also becoming an essential part of the Wharton curriculum, especially with the strong resentment from the public after the financial crisis of 2008. There is a rise in the number of students pursuing studies that combines non-profit endeavors with business frameworks. One of the classes that do this is Finance 230 (Urban Fiscal Policy). The class teaches students how to apply financial concepts to city planning, and often invites prestigious speakers such as the Mayor of Philadelphia, Michael Nutter. Another option is an Academically Based Community Service courses, where students learn the academic aspects of community service. This contextualizes the practice, giving it a deeper rationale as to why people do community service and providing students a framework for giving back to the community sustainably.

The faculty is probably one of the best in the world. The professors are truly inspiring; they can make you fall in love with a subject that you thought you would hate at first. They really make themselves accessible to students by holding office hours, having lunch programs and coffee chats, recruiting students as their research assistants, and even mentoring students’ research project! Unlike other schools, Wharton emphasizes on preparing students for a career in business—be it in consulting, start-up, banking, venture capital, private equity, hedge funds, family business, or even social enterprise. This means from Day 1, Wharton will teach students all the skills necessary to make it BIG in business. Among all the eight Ivy Leagues, Penn conceivably has the strongest pre-professional emphasis, which is great for students who want job security after they graduate.

Furthermore, during On-Campus Recruitment (OCR) season, top companies (Google, Goldman Sachs, McKinsey, Boston Consulting Group, Microsoft, Credit Suisse – to name a few) tend to recruit heavily from Penn. They will hold information sessions, coffee chats, career fairs, workshops and interviews. These firms also sponsor many student-run events to look for prospective employees. The Career Services office is also very active in preparing students for OCR. They will help the students with their CV, cover letters, interviews, and even helping students figure out a career to suit their interests, skills, and background.

Student life is extremely vibrant, dynamic, and exciting.  So many things happen on campus all at once! Penn has over 300 student organizations to cater to your interests – student government, food blogging, international affairs, social entrepreneurship, literary society, newspaper, and even tree climbing. If that’s not enough, the university will let students create their own organization, and help them with funding with all the different umbrella organizations.

Penn is known as the “social Ivy”; the motto here is “work hard, play hard”. People generally have a lot of fun – there are many parties, concerts, events, and hang-outs – but many students are also willing to hit the books in a Group Study Room on a Friday night (yes, I have been on both opposites of the spectrum). We also hold great events with lots of famous speakers coming on campus. I sat with Amartya Sen, the Nobel Prize laureate for economics, for an intimate lunch with one of the student organizations I was involved with. I met Gary Kasparov, a prominent chess player and political activist, in a lecture series held by an on-campus group. I watched James Franco giving a talk about his reasons for going back to school after pursuing an acting career.

If you are the type of person who likes concerts, Penn has an annual festival called Spring Fling. There is a huge carnival held outdoors, where there are free food, bouncy castles, photo booths, games and performances. Then at the end of the night, everyone heads off to the stadium to watch a concert. Some of the past performers include Flo-Rida, Ratatat, Tiesto, Passionpit, and Ludacris.

Philly, as Philadelphia is fondly called, offers a lot of great events and places to go to. I always like going downtown to explore the plethora of restaurants. If there’s one thing that Philadelphia is great for, it is definitely its diverse food choices. From Philly cheese steaks, spicy Szechuan dan dan mian, milky tart frozen yogurt, yummy Indonesian gado-gado, to tasty chirashi rice, we pretty much have it all!

Another option is to go watch performances in Philadelphia. There is a mini-Broadway area downtown that shows a lot of great musicals and plays (Les Miserables, Wicked, Sister Act are just a few examples). The music scene is also thriving in all genres: classical, pop, country, indie, etc. I have watched so many concerts within just one year of studying in Philadelphia: Owl City, Foo Fighters, Sara Bareilles, Maroon 5, 30 Seconds to Mars, and Metric. But if Philadelphia is not your kind of city, it is only two hours away by bus from the ever-dynamic New York City.

Penn is tough to get into, just like any other Ivy League schools. The procedure is standard: fill in the Common Application form, take the SAT/ ACT and two subject tests for SAT II (Engineering & Wharton students must take SAT II: Math Level 2), write the essays to answer the prompts (they often change from year-to-year), get two recommendations from two teachers at your high school, and send in your official high school transcript. This is a general application formula that most top U.S. schools use.

At Penn, you have to declare a home school as you apply, choosing between four of the undergraduate schools: Wharton, Nursing, College of Arts & Sciences, and School of Engineering & Applied Sciences. However, a lot of people assume Wharton is harder to get into than the other undergraduate schools at Penn. I worked at the Admissions Office this summer, and I found out that apparently the percentage of students taken for Wharton is about the same as the percentage of students taken for the other undergraduate schools at Penn. So do directly apply to Wharton because transferring internally and externally is not an easy process. You need to take certain required courses, write two essays, and get a GPA of at least 3.4, suggested 3.7.

I think the best phrase to summarize my education experience at The Wharton School, University of Pennsylvania is vibrant and challenging. I am very glad and humbled by this opportunity to pursue my education at such an amazing school.

If you’re interested to learning more about Wharton or Penn, take a look at the website links (Wharton or University of Pennsylvania) and feel free to ask me about anything!