Nusy, one of our columnist, received a scholarship to study at the Melbourne Business School and managed to kick-start her career in Melbourne, the world’s most liveable city, as soon as she finished her degree. After 50 applications and at least 20 interviews, she landed her first job and the rest was history. After years of hard work, she is now the Category Manager at the City of Melbourne. For her, building a professional career in a developed country like Australia is not without challenges but, of course, it’s not impossible. She wants to give us a hint on how she started her career through this article.

Early June 2013, I received a wonderful news: the MBA program at the Melbourne Business School offered me the ASEAN Regional Scholarship. This scholarship was from the university itself, so there was no requirement that I must return to the home country as soon as I finished my study. I even could continue working in Australia afterwards, which becomes the core story I want to share in this article.

Relocating to a completely foreign country for a woman with a husband like me needs preparation. But, my life is obviously easier with him as he is, and always be, my supporter. I had an in-depth discussion with my husband about our future plan, how we would manage our lives and marriage, who was doing what and how, etc. It was then decided that my husband would come with me to Melbourne under a student-dependent visa. While I was studying, he would work (yes, a student-dependent visa holder can work full time!) and once I was done studying, the role would reverse.

So many applications, so many interviews. Just don’t give up!

However, the plan did not work as smooth as we thought. It was really hard for me to secure a job in Australia. For your reference, approximately 95% of the employers in Australia require their candidates to have a permanent residency (PR) visa that will allow their holders to stay, live and work without restriction in Australia. Thus, in November 2013, I started the process of applying for PR, which was not without its many, many challenges. I began sending job applications in April 2014 under the student visa without any success; I merely secured a few interviews with big companies that were willing to sponsor their employees.

In July 2014, my husband obtained a student visa to study in the Monash University, so I converted my visa into a student-dependent visa. Using this student-dependent visa, I still did not give up, I even became more persistent to give my all. Finally, after more than 50 applications and at least 20 interviews, I landed my first job! I was hired as a Management Consultant at VCI Change, a boutique global management consulting company. I felt lucky that the hiring manager was Melbourne Business School’s alumnae, so he was willing to hire someone on a student-dependent visa.

Long story short, the Australian Government granted a PR visa for me in October 2014. My life was undoubtedly easier after securing a PR visa. Within only two months and after around 30 job applications, I got three job offers. I chose to join Telstra, Australia’s biggest telecommunication company, as a Change Specialist in their Procurement & Supply Chain department.

“Sell” yourself to employers in a correct manner

Australia is a market where specialist skills are highly sought after, so the more Australian experience you bring, the easier it is for you to get a job. It is particularly true to me. After working in the Australian procurement & supply chain function for about four years, it only took me about a month and five job applications to secure my current role as the Category Manager at the City of Melbourne. My top tips for on-paper job applications:

Well, I must say that the interviews were very different than what I experienced in Indonesia. All of them needed to be answered in a VERY concise manner using a STAR (Situation, Task, Action, Result) method. In most of the jobs that I applied, I was required to do a case study. This was to understand how I would approach a problem that they currently experience. I was lucky enough to be in the hiring position so that I could experience both sides of the table. My suggestion: ensure you answer the questions and leave a good impression to the hiring manager. After all, we are not there to interview as many people as possible (our time are precious too!) but to hire someone to complement our teams.

The effort is NOT over: Delivering the work and NETWORKING

Being accepted into a role is the START of even harder work, not the end. I believe in the 70:20:10 learning model: 70% of the learning is received through on-the-job experience, 20% is through learning from peers and more senior colleagues, and 10% is through formal training.

I cannot emphasize more the importance of actually delivering the work well and networking. You need to show your network that you are a reliable person and talk to people about how you can add value to them. Do not start networking by asking what they can do to you, but instead ask what YOU can do for them. This way, before you know it, you’ll have not only network but also friends in this beautiful city of Melbourne. 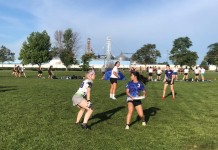 Ultimate Frisbee: How Playing a Sport Shaped My College Experience