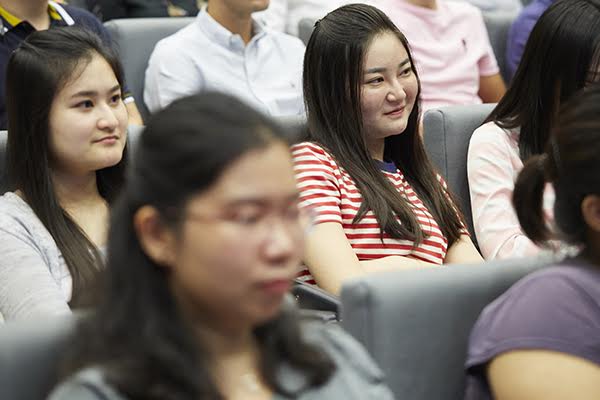 Been dreaming about having her master degree in Singapore since high school, Virginia managed to live her dream by studying a master degree at Law Faculty of National University of Singapore (NUS). IM Columnist, Astrid Kohar, interviewed Virginia about her experience in preparing her study to NUS.

Hi Virginia. Could you tell us about the story of how you end up in NUS?
During my last year of secondary school, I listed my dreams in one white canvas. Firstly, to gain my bachelor’s degree at Universitas Indonesia. Secondly, to obtain my master’s degree in Singapore, and lastly to work as a lawyer in law firms situated in one of the skyscrapers in Jakarta. Many years have passed, and I got admitted to the faculty of law of Universitas Indonesia; after 3,5 years studying there, I obtained my bachelor’s degree. In October 2017, I decided to give it a try, to apply to the National University of Singapore (NUS) which is ranked as the best law school in Asia. I always told my friends that I would never make it due to its reputation and rank, as I used to always look down upon myself (thinking to myself that I would never get admitted to NUS). Right after my graduation, I applied to many law firms in Jakarta, one of them is Melli Darsa & Co which is also known for having merged with PriceWaterhouseCoopers (PwC) Indonesia.

Right on the 5thof May, I checked my e-mail and I could not believe my eyes. I got an offer letter from NUS. But then my worst fear became a reality, the deadline of the acceptance was on the 30thof April and I just checked my e-mail on the 5thof May. I cried a lot, thinking that I would not make it to NUS. After talking to one of my friends in Nanyang Technological University, she asked me to write an apology to NUS and asked for a second chance. After sending an email to them, I came to the conclusion that if NUS could accept my reason, I had to let go the thought of studying in Singapore. There is a saying in Indonesia, “Kalau memang jodoh gak kemana-mana”, and you know what, yes, NUS accepted my apology and I was finally admitted to the National University of Singapore, the best law school in Asia.

Why choosing Singapore and NUS as the place for your master study?
The reason why I chose Singapore was because my dad and I have always loved Singapore, due to its cleanliness, strictly-maintained government policies, safety/security, having managed to have “greenery” everywhere despite being a busy city, and its multiculturalism which has impacted the variety of Singapore’s food delicacies. But why the National University of Singapore? Based on the fact that NUS has always ranked first in Asia in the university world rankings, I do not even think twice to apply for the chance to study there. Also, I would like to learn business law in one of Asia’s important financial hub and to learn more about the common law since I think it is important for a lawyer to gain exposure to the common law system (as Indonesia applies a civil law system which is different from the common law system in Singapore).

What are the process that you went through when preparing your registration to NUS? Any advice for those who also preparing their study to NUS?
NUS has allowed undergraduate students in their final year of study to apply for the Master’s in Law (LLM) program. Thus, from my 6thsemester, I listed out all of their requirements such as approaching my lecturers to help me through the academic reports, also known as letter of recommendations. I also discussed with my friend who has finished her master’s degree at the University of Melbourne, on how to make a good personal statement that can promote myself through only 500 words but also can expound on my ambitions, goals, and character as a prospective master’s student. Additionally, I read a lot of articles on how to construct a proper Curriculum Vitae that can portray my organizational life, internships, and part-time work as a student, in a concise manner.

It was during my internship at PwC Indonesia, that I actually needed to prepare for the other requirements for foreign students in Singapore, which include things such as physical examinations, passport photos, extending my passport validity date, certifying the copy of my bachelor’s degree certificate as well as obtaining English translations of the certificate, transcripts, and also other technical matters. Luckily, I have great seniors and supervisors that supported me throughout the preparation process. In case I have finished my workload, I usually asked for their permission to come work a little late the next day, for me to prepare those things. But because I went to work a little later than my colleagues, I usually had to work overtime.

For those who are interested in continuing a master’s degree in NUS, you can start by approaching your favorite lecturer(s) whom you think have the credibility to support your application to NUS. You have to study hard during your bachelor’s degree in order to have good academic records, and also do not forget to be active in your university. My advice is that rather than spending your summer holiday with only playing games or binge-watching TV series, take internships to broaden up your perspective to the lawyering world or law-related careers.

Do you have any tips or final words for those who want to pursue their dream to Singapore like you did?
For those that also have the same dream as I, which is to pursue studies in Singapore, try to find your accommodations 2 weeks or 1 month before your arrival. Do not be afraid with the “kiasu”-ness of Singaporeans, trust me, most of them are very kind and very helpful. Bring your most comfortable shoes because walking will be your new hobby and do not be worried if the taxi or Grab cars in Singapore are expensive because you will learn about the different lines of MRT system and enjoy the bus system that is very reliable and punctual. I can also assure you that your homesickness will not be a problem, since there are tons of Indonesian food which are sold here and last but not least, you will not know if you never try applying in the first place.

Even though there are always people who try to talk down my dreams with their sayings that sometimes hurt my feelings, (i.e. “Why Singapore? Isn’t it too near?”, “Huh? Pursuing master degree in Singapore? Are you out of your mind? Isn’t it a different legal system with ours?”, “Why not the Netherlands, United Kingdom, or America? Your dream is only Singapore? Hahahahaha”, “National University of Singapore? Are you joking right now?” and other sayings), sometimes you must remember that it is all about you. After all it is your own dream and it is you who will encounter all of the hardships and achieve your own dreams, not the others.

Photos are provided by Virginia. 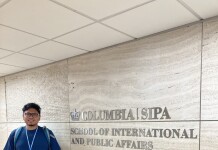