Not many have the chance to experience an exchange program during high school. Our contributor, Raya, was one of the lucky few. While most students opted for the famous countries as their destination, namely the US, Japan, France, or Germany — the countries that you hear often in news or at least whose languages are taught in school, Raya opted for Norway. Why Norway? Does anyone even speak the language here? Why not stick with the regular choice? She shares her story why she took the road less traveled and what she gained during the year living near the North Pole.

People often come to me whenever they see any news about Norway. Being, probably, the only person they know in their life that had grazed through the cruel winter of the north, I always enjoy the time I spend explaining how Norwegians don’t ride reindeer to work or have polar bear as pet.

Coming to Norway was a completely random decision for me. Out of ten countries given to us by AFS (the organizer and sponsor for the exchange program I was in) in country preferences list, I put Norway on my top three. I was feeling funky the day I decided to do that but deep down wishing the result to just surprise me. I was a dare devil that way. The day I opened the announcement letter saying that I was going to spend a year in Norway for exchange students program, I jumped with the surprise I definitely asked for. To be very honest, I didn’t know much about Norway other than its salmon and Northern Light. Prior to the departure, I felt obliged to do a little research on the country. So, you know, I knew what to expect. After hours of very dedicated Google searching, I felt sufficiently equipped with the information I found, though I still couldn’t fathom how cold -15° Celcius was on an average winter day (and boy, was I not prepared!) Later on, I learnt the meaning of “Det finnes ikke dårlig vær, bare dårlige klær”- there is no bad weather, only bad clothing. How reassuring!

Arriving in Oslo at the beginning of August, I found out right there and then that I would live in Tromsø, a town in North Norway with the population of 65.000 people. If you can find the Arctic Circle on the map, Tromsø is 350 km north of it. You might find it weird that up until my arrival, I didn’t even know where I was going to live in or which family I was going to stay with for one whole year. Now, ten years later, I find it weird that I didn’t even find it weird back then. Again, I was a dare devil that way.

I stayed temporarily until Christmas with a welcome family. The husband was a 65-year-old Norwegian man originally from Lillehamer (South Norway), and the wife was a 48-year-old Swedish lady, so for the first five months of my stay there I learnt Norwegian mixed with Swedish (did not complain, though). They didn’t have children together, so it was just the three of us in the house. A very nice and delightful couple, they helped me a lot during adaptation period. They had a pretty simple life considering the fact that he was a senior Cardiologist and she was a Nurse/Researcher at the university hospital. With the kind of earning they had, you’d expect them to have a deluxe house, fancy car(s), or a yacht somewhere. Apparently, “flaunt it if you got it” was not something that ingrained within every Norwegian. My host parents rode bicycle to work during summer, and ski during winter. That trip made up twelve kilometers back and forth, everyday! The only time they used the car was during monthly grocery shopping. One time my host-mom and I went out cycling and we switched age, hers seventeen and mine forty-eight.

My first realization of being far away from home was on the first Sunday when my host parents took me for a walk around the town to find the school I was going for. It was so quiet, no one was passing, and no stores were open. I found it really odd. Coming from Jakarta, weekend is the dizzying time you see more people on the streets, in the malls, or any tourist attractions throughout the city. I asked them, “Where’s everybody?” Much to their surprise, that question never popped in their mind. They, then, explained that Sunday was, and still is, a quiet day for Norwegian. People would stay with their family and spend quality time. The only place you would find Norwegian families on Sunday other than their house was out in the nature. From hiking to cross-country ski, it was amazing to see how much physical activities were integrated in their life, and it started from the young age. I, of course, tried participating in skiing lesson, though failed admirably while watching a-four-year-old swooped through the snows like they owned it. Well, they did. I would use the old saying that says “Nordmen var født med ski på beina” (Norwegian was born with ski on the legs) as an excuse. Coming from the tropics, we were definitely born with coconut bikinis!

Family life is very important for Norwegian. It’s almost like the living rhythm of the entire country is situated around family time. Stores closes at 6 pm because Norwegian starts dinner at 5 pm, while restaurants and bars will open after 7 pm. This would allow every family to sit together during dinner and discuss about their day or any important matters happening currently, giving it a lot of room for kids to learn how to express their opinion focally yet respectfully, and for parents to bond with their children. Interaction is always two-ways and each member of the family will treat the other as their equal. All that starts at dinner table. This was, probably, what accelerated me to learn Norwegian. Discussion at dinner table was always interesting and I was so eager to be a part of it. I found it only respectful if I did it in Norwegian, so I forced myself to learn fast, though they didn’t mind at all when I mixed Norwegian with English at the beginning. By Christmas, I was speaking full Norwegian on daily basic to my family, friends, teachers at school, and definitely to the nice lady who sold Pølse (a kind of hotdog) near the school cause she always gave me extra fried onion.

After the New Year had passed, I moved to another family. The decision was made through a mature discussion where my host parents and I agreed on the importance of sibling(s) with similar age group within the family. It was needed for me to be able to assimilate with Norwegian culture both from old and young generation’s perspective. I found it so relieving to be honest with myself about what I wanted and came forward about it. Of course that would mean for me to leave and find a new family, but my host parents were so supportive and, in fact, found me brave. I remember how they taught me to always trust my instinct and do what feels right for me, not what others would find favorable, no matter how scary it is to live by my decision. To this day, I still live by that advice.

We pitched the request to the AFS office and they found a new family for me within a week. Lucky for me, they lived only ten-minutes walking distance from the previous one, making it possible for me to visit them every now and then. My second family was a bit different, in a good way. They were loud and funny, to which I, of course, did not complain. They did not do as much sport as the previous family, although their youngest did play football for the town’s female football team. She went to the same high school as I did, only a year younger. Having her at school eased up my way through new friends. Norwegians are courteous and respectful but they’re notorious for being reserved, even they admit it themselves. My classmates were nice and welcoming, but it was not easy to interact on daily basic because everyone had a different schedule. My sister would bring her best friends home or took me out with them. I was adopted within the group right away. The father was the town’s sheriff who looked more like Santa off-duty and he literally laughed like one. The mother was a caring lady, who worked in the Blue Cross under “Childcare and Volunteering” division where she would assist young family from previously unwanted pregnancy and gave them consultation on family wellbeing, including childcare and financial advise. They had one eldest son who lived by himself and studied law at the time, and another daughter who studied Psychology and lived with her long-time boyfriend. Even though I was not related to them by blood, they would treat me the same as their biological daughters. That being said, my sister and I were responsible for assigned house chores and lived by the same rules. When we broke the rule, they would sit us down to have a talk and they did it in a way that wouldn’t make us feel like a child. They discussed everything openly with their children even about unpleasant matters. I found that Norwegian parents instill a sense of independence and responsibility since early age. They were not one who would typically tell their kids to do or not to do certain things, but they would encourage their kids to make an informed decision on their own and take the responsibility that came with it. Using their words, “You are free to choose, but you’re not free from the consequences of your choice.”

I could list everything I found different between Norway and Indonesia, but this is about what I learnt, not what everybody nowadays could find on the Internet. Reflecting on how ineffable it was for me to end up in Norway, I realized I wouldn’t have it any other way. I arrived there completely alone with no idea of what was going to happen, while all my friends back home were finishing high school and some others flew to another (more popular) exchange destinations. I found it quite unsettling at first, but also thrilling at the same time.

When you’re on your own, far away from home (and especially not being burdened by the pressure to finish a certain degree), you have the opportunity to focus on your own self-development. You open all your senses to learn outside the classroom. You ask yourself questions you never thought exist. You’re faced with many barriers that could prevent you from functioning normally as you would in your home country, but you’re also faced with the reality that things could be turned around once you change your perspective about it. And most of all, you challenge yourself to step out of your comfort zone and confront yourself to the fragility of your solitude.

In the world where (almost) everything is measured by the way you present yourself externally, befriending your solitude becomes a kind of revolutionary act. You hold the key to the place where you are the center of your balance. You learn to stop comparing yourself to others around you, not to silence your insecurity, but to let go of the constant need of people’s approval to validate your existence. And most of all, you learn to embrace the uncertainty in paving your own path, knowing that the aftermath is going to be so rewarding. Especially that. 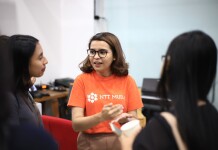 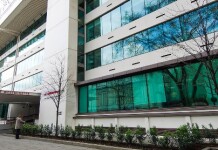 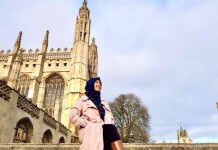