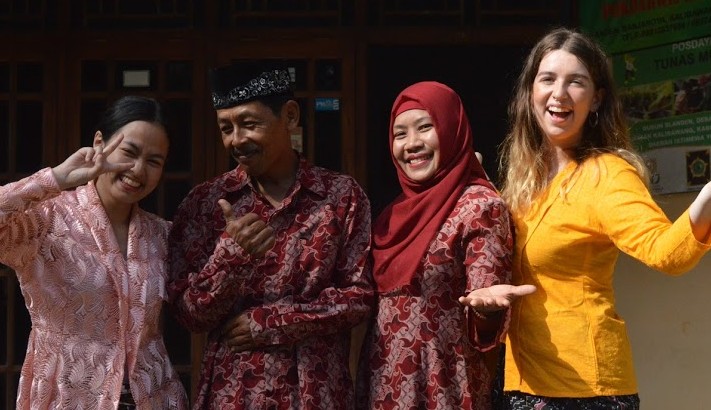 Ever desired to use your semester break to travel abroad and discover the world while helping a community in need? Salsabi Rolansyah shares her experience in volunteering and what she learns from the program.

Some of us have probably gone through some phase of questioning whether our working experiences were enough, or whether we have the adequate skills for a job. Well at least I did.

After going through some several options to learn more, I decided to volunteer. The volunteering program that I enrolled in was an elective subject made available for undergraduates by the University of Melbourne. It commenced for six weeks in Jogjakarta during summer and winter breaks. The program was also in partnership with two NGOs, AVI and Satunama, from Australia and Indonesia respectively, where the volunteers will be working closely with them in creating a development project in an assigned community.

I’ll give a little bit of my story as to why I feel volunteering back in Indonesia has benefited my professional and personal growth, as well as making my university experience more rich.

This is a complete misconception. Volunteer work is for a good cause, but the overall atmosphere behind the work is not simply to give back. There is a requirement for the volunteer to create outcomes for the community and the NGOs involved. The particular program that I did can rather be considered an internship for those aiming to work in the development field. Not only did we create a community project, but the dynamic of the program involves a bilateral exchange of cultural experience and effort.

As we got selected, we had to go through training at the beginning, both in Melbourne and Jogjakarta. The training was to expose and deeply understand certain codes of conduct that concerns with cultural sensitivity, working with children ethically and the dynamics of working in an NGO at a different country. This is very essential to the program, as it also cultivated the required skills to work professionally in the field, such as communication, analytical skills, as well as team work. It also taught the volunteers about handling emergency situations and observing risks, as these things have happened previously.

Such training also gave out the idea that a volunteer represented the associated NGOs (and Melbourne University in my case). It was a work that is considered professional for many companies involved in the development field, as there are expectations from stakeholders that must be fulfilled.

Why would you do a program in your own country when you’re already overseas?

I think it depends on how you approach your overseas or exchange program. My aim was to learn about what I could offer back in my country, and the dynamics to garner that potential. This elective subject provides the option to go to Nepal and yet I still decided to volunteer in Jogjakarta to achieve this aim.

Also, as an Indonesian, others had placed a larger expectation on me, since I had the advantage to communicate more effectively through Bahasa Indonesia. As a fellow citizen, I was also expected to offer more of my skills and effort to creating the project. It was pressuring and challenging but self-fulfilling because I got to dig deeper into the community and overall work. It led to a meaningful cultural exchange between me and my assigned workmate, the respective NGOs, and the community, which allowed a very satisfying and well-structured project to be implemented.

As a matter of fact, I still went through some phases of culture shock

Even if it was in Indonesia, I was placed in an environment that I have yet travelled to for a long period of time. Furthermore, I had the chance to face a unique environment where I was surrounded by Australians who were unfamiliar with my home country, and Indonesians who came from a completely different background.

There was a mix feeling of being at home yet somewhere foreign at the same time. It was a slightly mind draining situation to be in as I had to split my thoughts into different context depending on which group I communicated to. For instance, if I was facing my supervisor from Australia and a certain community member, to communicate with both required a change of mindset as each person followed a completely different cultural etiquette to communicating. This constant state of having to accommodate different patterns of communicating often lead to a mental block, or what I would consider a culture shock.

Even so, having to come across such culture shock for many times during the program has helped polished my communications skills that were beyond the materials taught during training or university. The mental block occurred less as I become more accustomed to communicating to different audiences, with different culture and language. This experience was rather pivotal to my project’s growth and success.

What did you do when you volunteered?

What I did was to create a development project within my assigned community. Again, as this program involved various stakeholders, such as the NGOs involved, the university, the supervisors and staff, as well as the community, the project that was designed by the volunteer were required to at least fulfill certain outcomes expected by these stakeholders.

Therefore, my volunteering journey started by researching the needs and expectations of these stakeholders and how to achieve them.

At that time, the theme that was set by one of the NGOs, Satunama, was to advocate for children’s rights and health, especially surrounding the ratification of FCTC (Framework Convention Tobacco Control). The training at the beginning, as I mentioned previously, also focused on familiarizing ourselves on this theme.

After training, I was partnered with a friend named Emily. The both of us were placed in a community called Banjaroyo. A village 45-minutes away from Jogjakarta that consists of 19 mini-villages also known as Dusun. While we were there, we lived with a host family.

As we arrived, we made various observations and built relationships with the local government officials, as well as a recently created youth group called Sanggar Bocah Menoreh to understand the community better. We realised that the community had problems regarding handling wastes, and often burn trash in their backyards. Also, it children were commonly exposed to tobacco smoke both in public and private places. Consequently, Emily and I created a plan to raise awareness regarding clean air, to tackle both problems around waste burning and smoking through the lens of advocating for the rights of children’s health and development.

The project targeted both parents and children where we created lesson plans for kids and summary of the program for the parents in a booklet. The booklet included teachings on waste management and smoking. We came to many events where parents and village representatives would gather, which includes meetings amongst PKK, Dawawisma, and other groups, as well as weekly meetings at the local health centre commonly known as Posyandu to give out these booklets. Also, with the help of the youth group, we gathered at least 15 children each three days within the week to implement the lesson plans that we created for them.

During the last weeks, we initiated a capacity building plan to ensure that our lessons sustain and potentially spread across the many Dusun within Banjaroyo. We managed to get Sanggar Bocah Menoreh considered by the government for funding and ratification and have the youth group fully established with elected committees. In this way, they will be able to implement more activities that can spread awareness regarding clean air and their rights amongst the children in the village. Moreover, we did further program socialization for the parents at three more villages. With the help of the community manager also known as Lurah, we constructed weekly clean-up days that were free from burning trash, as well as craft classes with recyclable wastes.

What did you learn from the experience?

As an Arts undergraduate student, it is very rare that I get to work on an assignment that requires me to ‘create’ something. I usually did research, analysis and write essays. The skills that I obtained from doing these types of assignment were the ability to think critically towards theories and communicate my thoughts clearly in a written form.

I really thought that such skills would not be as useful when faced with a work that is practical, or only works well when dealing with theories. However, apparently, these skills were one of the assets that allowed the project to be comprehensive yet realistic. I just never had the medium to see where these skills can be used aside from writing essays. It made my university experience a lot more complete as I now know how to use and develop my skills when dealing with a certain work.

Would I recommend anyone to volunteer?

Like I said, volunteering was an experience that I felt has encouraged my professional and personal growth. The program was really challenging, but very thought provoking as it pushed me to be innovative and adaptive. Moreover, I got to meet people who were passionate and intelligent. This was indeed a really positive environment to be in. All in all, personally, it was a form of contribution that I have been dreaming of, which was to use my skills (and polishing them along the way) to create a project that could help others.