Hi everyone! My name is Cecilia Liando and this is my experience in studying Chinese language for one year in Peking University, Beijing, China.

There were a lot of Indonesians, a wave of Indonesian people you can say, studying in China. In Beijing, they could be found easily in big numbers at Beijing Language and Culture University (BLCU) and other universities. Other students studied in Shanghai, Guangzhou, Xiamen or Shenzen. Most of us usually are studying Chinese language after our undergraduate year. It was the perfect time to take some time off for ourselves and rethink our choices in life. Some students studied International Business, enrolling in either undergraduate degree or master degree (MBA).

In my Intensive Chinese Program in Peking University (2012), Indonesians were the majority, followed by Koreans then several Thai and other nationalities. We could be found in every class offered, from the lowest to the highest. Indonesians were not found so much in the regular Chinese program, partly because there were no educational agents in Indonesia that offered to prepare students to go to regular programs. Educational agents were very important because they could prepare everything for students who wanted to go to China to learn the language but had no prior knowledge or had little knowledge of Chinese. Although of course, I heard through the grapevines that some agents actually left their students at the destination airports in China, just like that. Students should always check the reviews and feedback from previous students. I checked, of course.

It was definitely more expensive compared to other university in the agent’s list for Indonesians, but you get access to Peking University’s super huge university complex with the famous Weiming Lake, a cinema/opera hall, various super cheap and delicious food in many different canteens and of course world-class education. After all, the education is what students were looking for. We can only enter the University’s complex using the red student card or we have to report to the security in front of each gate. There are several gates in Peking University: West, East, Southeast Gates to name a few which are usually guarded by security guards just like the Chinese versions of the security guards in the Buckingham Palace.

In my first semester in the Intensive Chinese program, there were six levels: A class until F class with F class being the highest class. Usually after F class or after the first semester, the option was to study in the Regular Class, which was actually cheaper but had a lot of requirements including guarantor who lives in Beijing. There was a placement exam to determine our level at the beginning of the semester. My class, which was a C class studied Listening in Chinese, Conversation in Chinese, Writing in Chinese, and Business Chinese. In my second semester, I got E class and studied almost the same subjects.

In the subway, at least in Beijing subways, Indonesians were the loudest bunch you would ever came across. The Chinese people would just be quiet, stared gapingly at us and our ‘strange’ (read: unique) language while trying to figure out which dialect of Chinese we spoke and where in China we did come from until someone would say: 国外, 不是国内 (from overseas, not from inside of China). Some Chinese people could not stand us and one even tried to challenge us, told us to be quiet (he’s reading a book, apparently). When we heard another bunch of people talking loudly in the subway, we would try to listen and voila, more often than not, they were also talking in Indonesian. In the subway, all of passengers’ bags would always be scanned every time we enter the subway, just like in an airport.

Living in Beijing, we were accustomed to speak and think to some extent in Chinese. This was mainly for survival reason. The most famous case would be the ‘er’ sound found in Beijing dialect when talking to Beijing taxi drivers. We had difficulties communicating with them, when we told them about the destination such as Xizhimen (西直门) because you see, they would not understand you unless you said it +er = Xizhimenr (西直门儿). The same case for Fuchengmen (阜成门) and words like Dongmen (东门). If they did not understand you, they would just refuse you and went away. In 2012, the taxi was quite cheap, especially when you divided it among four people (maximum capacity).

Back to my dorm room, just in front of Peking University, 中关新园, I pressed the lift button and started to go up. It was truly a luxurious living space, compared to the usual local dormitories inside campus. There were 9 towers at that time: 2 were actual hotels and several towers were dormitories for international students. It was so nice that I thought it was the best dormitory in all Beijing, although I heard it had the same living condition as at universities in Shanghai. I stayed in one unit with two bedrooms and one bathroom, sharing the bathroom with just 1 other person. Every morning, we just crossed the bridge, walking to each of our classroom. I heard through my Chinese friends though that their dormitories were very different. There could be 6 or 8 people living in one room and the bathroom was a communal bathroom without any partition separating people’s bodies. If you go to China, you must be prepared to meet nasty toilets and bathrooms, even in Peking University.

Time flew so fast that one year in Beijing had gone. It was time to go back to Indonesia. It was truly an experience, a great and life-changing experience for me. My friends and I gained so much knowledge about the language and the culture of Chinese people, made a lot of international and local friends, as well as created some memories. We were able to order food in Chinese, give directions to taxi drivers, read newspapers and make a speech in Chinese.

Looking back now, when I’m thinking and writing about all of these, I can only remember and cherish these memories. There is no turning back in life and I am grateful for those moments, just as I am grateful for this current moment and the air that I am breathing now. Beijing and China will always remain in my heart. 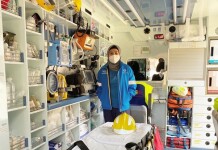