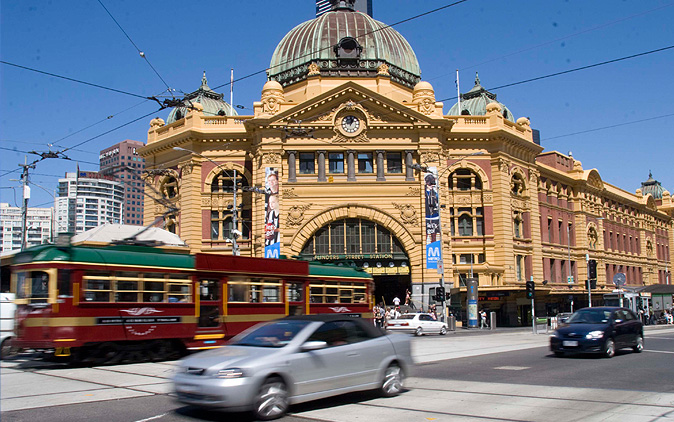 The University of Melbourne is one of the most beautiful and romantic universities in the world. When autumn comes and orange, red, and yellow leaves start raining down on the brick road, there really are no words to describe the nostalgic scenery unfolding before your very eyes.

While it is the number one university in Australia, what draw me most are the age and experience of the university, the grey, old facades of various buildings, as well as its willingness to apply new methods of teaching.

Melbourne itself is a beautiful city with weather like a woman’s mood swings. “Four seasons in one day,” they always say. And they are absolutely right!

The hidden treasures of arcades, secret lanes with colorful splashes of graffiti, dessert shops and chic fashion are all within a few tram stops from the university. Since I spent most of my Melbourne years studying at home or in the library, let me just stick to the stuff I really know.

I completed the last three years of high school (SMA 1-3) in the suburbs of Melbourne where my family decided to live after migrating from Indonesia. The many years of education in Indonesia meant that in terms of Mathematics and Science, I was slightly ahead of the class. Not having to worry so much about those subjects allowed me to focus on trying to adjust to the Australian accent, splurge my time on art, and even take on Kumon Mathematics on the side.

With regards to choosing a public school or private school, my parents chose the latter just to be safe. The public schools nearer to the CBD are quite safe in terms of the studious environment because most of the students are aiming for university. In the suburbs, however, less than half of my classmates had university in mind.

Many of the Indonesian students I met at university took a different path by completing high school overseas and taking one year of foundation studies at Trinity College before studying at the University of Melbourne. Others came straight from high school because their schools used a compatible curriculum.

It took me a while to get used the way of life here! Compared to the constant rush and change that are so typical of the ‘Jakarta way of life’, Melbourne is pretty laid back. In terms of change, nothing ever really happens suddenly. For example, the change of public transport ticketing system from Metcard into Myki actually took nearly eight years (and still counting) to implement it.

But to say that it is merely “laid back” would be doing great injustice. Melbournians are generally open to new ideas and are keen travelers. Many of my high school friends from the suburbs of Melbourne have caught the traveling bug and are constantly planning trips to Asia, Europe, and Africa. They work hard and before you know it, they’ve been all around the world.

While Melbournians are hardworking when it comes to their jobs, they also remember to enjoy life. There seems to constantly be a mentality of “work hard, play hard”, or rather, “work hard, so we can play hard”. Whichever it is, there is always a fun activity to look forward to after exams.

After my first year of university, I decided to move to the CBD because traveling from my parent’s place took at least 1.5 hours each way. That’s a total of 3 hours every day, 5 days a week.

If you’re thinking of living in Melbourne (or Australia for that matter), something that should be considered is the cost of living, which is rather high compared to other countries. A typical meal at the university cafeteria can cost AUD 5-12, while a proper meal out can cost AUD 15-25. Public transport would be around AUD 6-12 daily, depending on how far and how frequent one needs to travel. In the CBD, rent for single studio apartments can range AUD 900-2000 per month, while shared living can cost AUD 600-1000 per month. My groceries alone cost a minimum of AUD 150 per month.

Cooking is definitely the better option. Personally, I love chicken Schnitzels and frozen vegetables! All I do is sticking the chicken in the oven for 20 minutes, cooking my rice, heating up the vegetables for about one minute in the microwave, and DING! There’s my healthy meal. And living right across the university solves public transport fares.

Shopping, or the healthier alternative of window shopping, is something I enjoy doing for stress relief. One thing to remember is that most clothing stores close at 5 PM sharp except on Thursday and Friday. I was so shocked when I first learned this!

In terms of part-time jobs, generally the university doesn’t recommend working more than 20 hours per week. It is quite manageable to hold a casual job during undergraduate years. With regards to postgraduate study, it can be harder to squeeze work in there. But it all depends on how good your time management is and on what course you are studying.

Surviving aside, there is always something to discover, great food to try out, and places to visit in Melbourne. It’s a beautiful city – currently my favorite in the world. There really is no reason to be bored here!