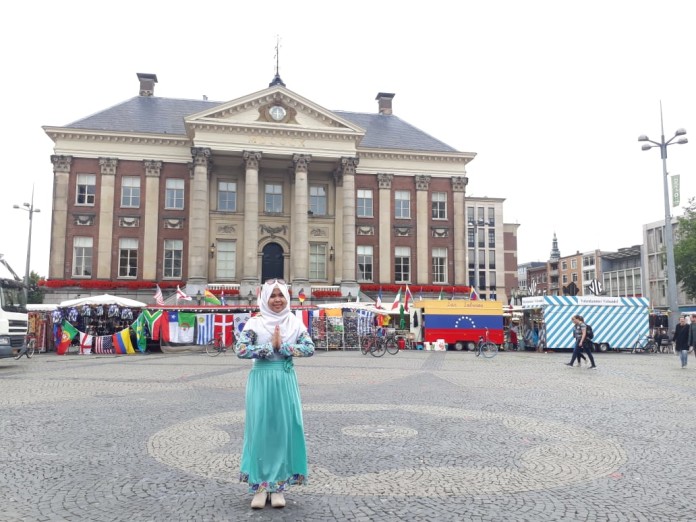 Coming from a small city in Indonesia, Nur Puji Lestari never dreamed of pursuing her education abroad. However, due to her hard work and perseverance, she was able to complete her Master’s Degree at the University of Groningen in the Netherlands. In this article, Indonesia Mengglobal Columnist, Dini Putri Saraswati shares Puji’s journey and lessons she learned along the way.

Nur Puji Lestari, or Puji, the last-born in a family of eight from Pekalongan graduated with a Master’s degree from the University of Groningen, the Netherlands majoring in Supply Chain Management in 2018. Coming from a lower middle-class family, Puji has proven that everyone can pursue a higher education through scholarships. Since high school, her parents never funded her tuition fees as she got scholarships from the government. I got a chance to talk to her and I would like to share her inspiring life story.

Puji was always on the top of her classes in high school. After she graduated, she got an offer from Bidikmisi Scholarship for her Bachelor’s degree in one of the best universities in Indonesia, Universitas Gadjah Mada (UGM) Yogyakarta. After a thorough consideration, she picked Industrial Engineering for her major. At first, she got no idea about what the study is about and how it would be like being far away from her family. All she could think about was getting the scholarship so that her parents would not have to pay for her tuition fees. “Thank God I was accepted. But here comes another problem: the living allowance was too little, only IDR 500,000 per month”, she said.

Managing IDR 500,000 per month in Yogyakarta was not an easy task. Puji’s rent costed IDR 180,000 per month and that left another IDR 320,000 which was not enough for her daily needs. In order to get more income, she resold traditional cakes that she bought from the traditional market to the campus. Moreover, she tutored natural science to primary to high school students. “I had a very busy routine back then. In the morning, I got to get up earlier to get the fresh-baked cakes and then distribute them to the campus cafeteria. After that, I attended one or two lectures until dusk. At night, I tutored the students. I arrived home at around 9 or even 10 pm to study and work on my assignments”, she explained.

Puji’s perseverance really paid off that she graduated cum laude in 2014 from UGM and that has grown her interest in getting another scholarship for her Master’s degree. Europe was not her study destination as she thought that continuing her study to UGM would be more than enough as long as it is funded. But when she was working at Merck Sharp Dohme (MSD) Pharma Pasuruan after her graduation, Lembaga Pengelola Dana Pendidikan (LPDP) Scholarship opened for application in 2015. “The news truly excited me to apply. Especially, there was a privilege for the alumni of Bidikmisi Scholarship where the requirements were less complicated than the regular one”, she revealed. Once she got accepted, she resigned from her job and started to prepare for her study.

A Long Road to Groningen

As an alumna of Bidikmisi Scholarship who also got LPDP Scholarship, Puji was privileged to attend an intensive English course in Yogyakarta to prepare her application to her desired university. The course required her to resign from her job to focus on obtaining an English certificate. Although the course was fully funded by LPDP, she was on a long line of waiting list. Resigning from a job while waiting for her turn to undergo an intensive English course was a difficult task for Puji as she had to support her life without having a stable income. Luckily, she has been running her own business of handmade embroidery goods, such as dolls and shoes called “Rumah Kreasi” which has contributed to her financial situation.

While attending the English course, Puji tried to find a university that would suit her best. Having no clue on where to study, she googled for information and got Industrial Engineering and Management at the University of Groningen on the top list. Interested in the prospectus offered, she applied right away. Not long after, she got an e-mail that said she got rejected because her portfolio did not match the curriculum of the faculty. They recommended Puji to apply to Supply Chain Management instead.

The struggle did not stop until Puji finally got a Letter of Acceptance (LoA) from the Department of Supply Chain Management at the University of Groningen. Her last-minute enrolment caused a hurry-scurry for her visa and other travel documents application. “Fortunately, I got them all set just in time. I was so blessed that ultimately I could tell everyone: I am ready for Holland!”, she exclaimed.

Moving to the Netherlands: The Culture Shock, the Excitement

Having zero experience in travelling abroad, Puji was quite nervous. “It was like a roller-coaster feeling. I have never been on a long haul flight before. I was scared I would be lost somewhere on my transit or miss my flight. But thankfully there were a few Indonesian students on the same flight and one of them even went to Groningen with me”, said Puji.

Puji also added that once she stepped her feet in Groningen, she did not stop being grateful. She had never imagined of pursuing a Master’s degree in the Netherlands, never been there, and even having no knowledge about the country. “It felt like a dream, really. But then I realised that my journey did not stop here. This was only the beginning as there were a lot to endure”, she asserted.

Being miles away from her home country was quite a challenge for Puji. She had to fight the freezing cold weather in the Netherlands that she suffered from severe dry skin. Furthermore, she experienced a whole difference in the prayer times because of the different time zone from Indonesia. It was rather inconvenient for her to match her timetable to the local prayer times. It also affected the fasting month during Ramadan in the summer where the sun sets for barely five to six hours that Puji had to fast for eighteen to nineteen hours in the midst of her long list of activities.

As a Moslem, Puji had to be extra careful to select only halal foods while in the Netherlands this might be a bit tough. “Well, although non-halal foods were everywhere in the city, I was lucky enough that apparently there were some halal shops and restaurants too. It was totally different from Indonesia where most foods are halal. But apart from that, I learned to read the ingredients on the food package”, Puji argued.

Puji also encountered a culture shock in class where most students and lecturers were coming from overseas. As she was still struggling with English, it was quite complicated to comprehend the lecture too. Furthermore, her multicultural classmates confused her where she could hear someone speak English while the others were busy talking in Chinese and most people would chat in Dutch.

According to Puji, the learning system in the Netherlands was new for her as she had to read all the references first before embarking on a class. “It is important to study the topic first because it would be very awkward to come to the class empty-headed. Back when I was in Indonesia, reading the articles was not compulsory”, she explained.

On top of that, Puji was very delighted to study in Groningen where she could expand her network as Groningen had an international environment. Puji also actively engaged in Perhimpunan Pelajar Indonesia (PPI) Groningen as a Coordinator of the External Division where she also volunteered in several events and even played angklung, Indonesian traditional instrument, in front of the international audiences.

Studying abroad has allowed her to open her mind to be more respectful of other cultures, sensible, and disciplined. “It was indeed an eye-opening experience, being exposed to people from various backgrounds in a whole distinctive country from mine, I am now able to see something from different perspectives”, emphasised Puji.

Being a Motivator: Puji’s Ultimate Goal

After Puji finished her Master’s degree in 2018, she came home to her family in Pekalongan. Back home, she realised that she still had an undone bucket list left and one of them was paying for her parents to go on an umra. “I had this promise with my siblings to book tickets for my parents for a pilgrimage trip to Saudi Arabia once we had the money. I collected the money when I was in the Netherlands and with that money along with my siblings’ savings, I could go on an umra with my parents. I felt very thankful that finally I could make my parents super glad with my graduation and the pilgrimage”, she uttered.

However, Puji’s list does not stop until she has sent her parents to a pilgrim. She is yearning for contributing her skills and knowledge she got from the Netherlands to her surroundings. She has been in touch with the local community in her hometown by being a lecturer at two universities, namely Institut Teknologi dan Sains Nahdlatul Ulama (ITSNU) and Politeknik Pusmanu Pekalongan as well as being a civil servant at Dinas Penanaman Modal dan Pelayanan Terpadu Satu Pintu dan Tenaga Kerja Kabupaten Pekalongan. “Through these professions, I am able to promote the importance of higher education as I am frequently invited to give a talk in front of the youths in Pekalongan” said Puji. She also mentioned that actually many needy but productive generations in her neighbourhood are interested in getting grants for a higher degree, they just do not know how.

When asked about her ultimate goal, Puji answered, “A motivator”. She elaborated that she likes motivating people not to give up on their dreams. “I would like to prove them that successful persons do not always come from a wealthy and urban family. I believe that we, a lower middle-class community from a small village can be too!”, she exclaimed with a full confidence.

Nur Puji Lestari, or Puji, has obtained her Bachelor’s degree from Universitas Gadjah Mada (UGM) Yogyakarta majoring in Industrial Engineering in 2014. In 2017, she continued her Master’s degree to the University of Groningen focusing on Supply Chain Management and graduated the year after. Currently, she is working as a civil servant at Dinas Penanaman Modal dan Pelayanan Terpadu Satu Pintu dan Tenaga Kerja Kabupaten Pekalongan while also managing her own business called “Rumah Kreasi”. She also actively contributes to the education sector by being a lecturer at Institut Teknologi dan Sains Nahdlatul Ulama (ITSNU) and Politeknik Pusmanu Pekalongan. She likes to share her motivation, inspiration, or scholarship guide to several high school and university students in her hometown too. 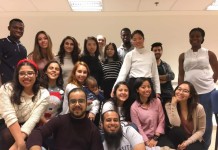